Do Any Of The 'Stranger Things' Boys Even Deserve Nancy Wheeler? 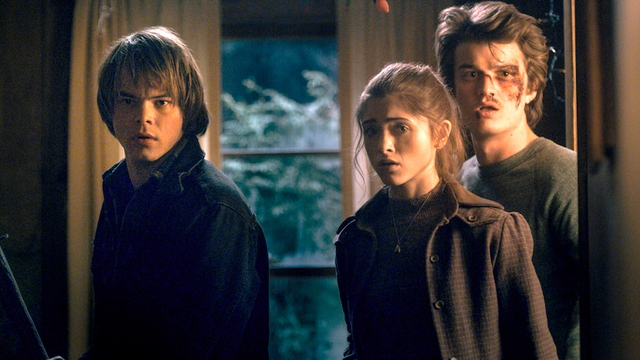 You're all thinking it. Don't lie.

Now that the dust has settled on one of the most gripping seasons of television this year, it's time to answer some lingering questions. Stranger Things season 2 gave us a lot to mull over, but nothing more pressing than the issue of Steve, Nancy, and Jonathan's love triangle.

Disclaimer: I'm aware that this is an in-depth post about fictional teenagers with major character flaws. Let me live.

I think it's fair to assume we've all chosen sides in the Steve/Nancy/Jonathan affair. Some of us desperately want to see Nancy with the newly reformed Steve, while others are firmly in the 'Jancy' camp.

But do any of these guys even deserve Nancy? And does Nancy deserve them?

The case against Steve.
The Stranger Things fandom's wholesale appreciation of Steve Harrington is still in its infancy. For much of season 1, Steve was a macho bully whose performative acts of masculinity (smashing Jonathan's camera, spray painting rude graffiti about Nancy) turned the audience largely against him.

Still, after one act of heroism, Nancy and Steve end up together at the end of season 1, setting up a tenuous pairing for season 2.

In Stranger Things 2, Bad Steve™ turns into Dad Steve™, but is still deeply insecure about Jonathan and Nancy's friendship (turns out he's right to be). Although Steve's softer side comes out around the kids, his "King Steve" tendencies linger, leading him to make needlessly dumb decision like taking on a whole Demogorgon on his own and fist fighting Billy in front of the kids.

Steve's redeemable moment comes when he tells Nancy that he's not angry at her for choosing Jonathan.

We know Jonathan likes the Clash and photography, but that's literally every sensitive boy you went to high school with who dreams of going to NYU. Is Jonathan funny? Not that we can tell. Is he particularly charismatic? No. Even his brother Will has clocked onto the fact that no one wants to be around Jonathan.

Still, Nancy and Jonathan have a bond which results in this pull-out joke which I am still screaming about. The case against any of them interacting with each other ever again.
It's clear that both Jonathan and Steve have their flaws. But so does Nancy.

After getting drunk on punch at a Halloween party (first rule of any party: avoid the punch), Nancy is all too quick to admit that she's not in love with Steve. Racked by guilt over Barb's death and overcome with lingering feelings for Jonathan, she strings Steve along for an entire calendar year knowing that she straight up doesn't love him. SIS.

Nancy also definitely cheated on Steve. After their big fight, it's unclear whether she is actually broken up with Steve. Instead of just ending things with him, Nancy goes off with Jonathan like she is Nancy Drew and he is her emo detective sidekick. Simply put, despite being sweet and nice to Dustin, Nancy is lowkey messy.

The verdict?
Nancy and Jonathan deserve each other. They have history, chemistry (or whatever their version of chemistry is), and they're riding high on getting justice for Barb. Steve may have leftover feelings for Nancy but he needs to focus on the kids and let Jancy commence.

You've won this round, Jonathan. Now don't f*ck it up.