Who Is Ben From "Riverdale" Season Two? 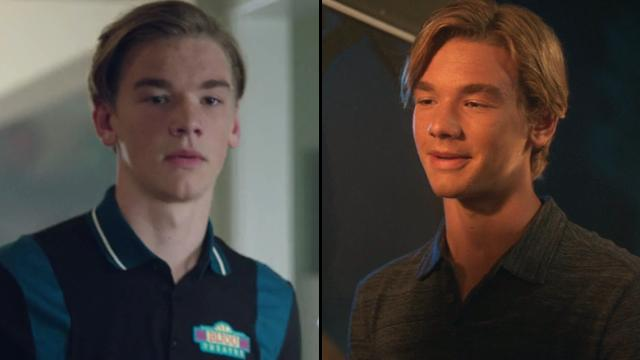 Season two of Riverdale has had a lot of surprises, including the brief return - and subsequent murder - of Miss Grundy, the appearance of Betty Cooper's long lost brother, Chic and Penelope Blossom's new career path. SPOILER ALERT: She's a prostitute now! We've come a long way in one year, haven't we?

But perhaps the biggest surprise of them all is the occasional reoccurring appearance of one very familiar face who goes by the name of Ben.

Ben has appeared in three separate scenes throughout the show now but has contributed absolutely nothing to the main storylines.

In season 1 episode 4 ('The Last Picture Show'), Ben can be seen working on the refreshments stand at the Twilight Drive-In and briefly interacts with Kevin Keller. His transformative line is: "Sorry, we're out of dogs". Transcendent. The crowd was moved.

He made his second unexpected appearance in the premiere episode of season 2 as the last underage music student victim to ever have the displeasure of kissing Miss Grundy.

He made his third, and so far final, appearance in season two episode 12 ('The Wicked And The Divine') where he's caught by Betty leaving the Cooper's house after a 'job interview' with Chic, who is in his robe. Ben now works at the Bijou, a movie theatre in Riverdale.

Thanks to THAT scene, fans have now been left asking one very important question: Who the actual hell is he?

Is he part of Chic Cooper's Cam Boy supergroup? Is he Chic's boyfriend? Are him and Chic Cooper conspiring against the entire town of Riverdale? Because honestly, who interviews for a job... in his own home... in his robe... while drinking milk. Ben is like 12, surely he's not in charge of hiring staff at the movie theatre. He wasn't interviewing for a job. No way.

But what does all this have to do with Miss Grundy? Is he a secret mole? Does he know things? What does he know? Is he feeding information to Chic who may or may not be a secret government agent? Will we ever see him again? Where will he pop up next?

Who plays Ben on Riverdale?

Ben is played by a young actor named Moses Thiessen. His season 2 reveal as "Ben" was a major step up for Moses, who was listed as "Snack Bar Guy" for his season 1 IMDb credit.

His appearance definitely plays into the episode's title, 'A Kiss Before Dying', (RIP Grundy) but whether or not he'll be back for more - or even end up as part of the larger picture - remains to be seen.

You never know, though. One season you're "snack bar guy" and the next you're...BEN. Anything can happen in Riverdale.