Living in the year 2015, there is no shortage of internet articles that ask if (insert literally any awarding body or government institution) has a race problem.

Turns out the answer, when it comes to the Grammys (and everything else if we're being honest with ourselves), is "yeah".

After this year's Grammys and Kanye-gate, Media startup Vocative charted the trends in Grammy nominations over a 50 year period.

They measured how the number of nominations for Black and Latino artists compared to those of White artists over the same period of time. 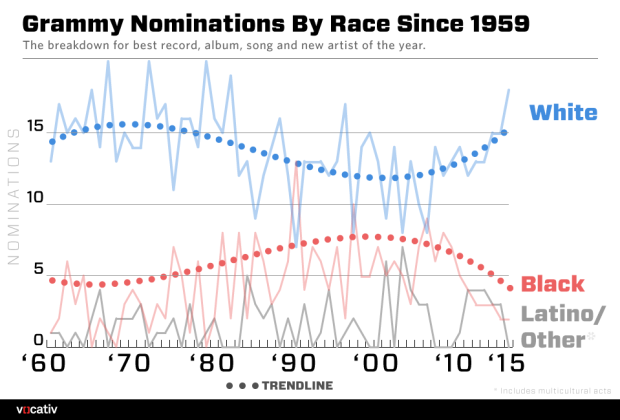 The findings show that, although Caucasian artists have nearly always received more nominations than their ethnic counterparts, the late 90s and very early 2000s were the closest that the awarding body ever came to equal distribution of nominations.

Vocativ then shifted their attention to the Billboard Hot 100 Charts and found that the numbers were nearly identical. The trend in which artists charted mirrored the Grammy nominations eerily similarly. 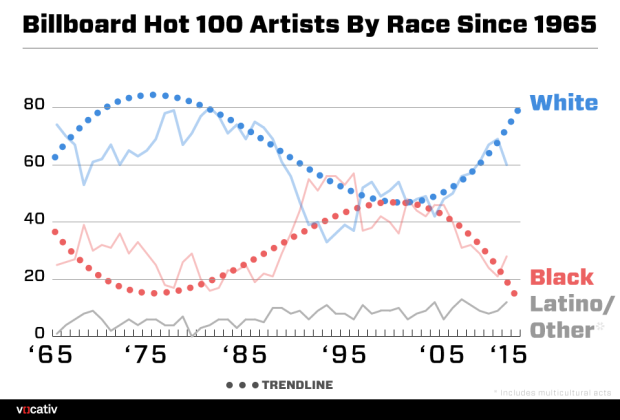 The year 2015 saw the lowest number of Black and Latino artists nominated for a Grammy since 1981.

As inelegant as Kanye phrased his issues with the Grammys, could he have been onto something?