PUT THAT TRAP EP DOWN, GRANDPA.

If you're a grown-up music fan who believes that "new music" is terrible and your "love for the classics" is an original opinion, this latest tidbit of research is probably gonna hit you where it hurts: your age.

A recent study from Ajay Kalia, put together from listening data from Spotify and Echo, has shown that a recurring trend in people in their early 30's is the "taste freeze" of the music you like. Basically, when you hit that sweet spot where you surrender to full adulthood, you're pretty much more likely to just give up looking out for new music.

"First, listeners discover less-familiar music genres that they didn’t hear on FM radio as early teens, from artists with a lower popularity rank," Kalia explains about the formation of your tastes. "Second, listeners are returning to the music that was popular when they were coming of age — but which has since phased out of popularity."

The graph below shows the average music listener through their ages, against the current popularity of their music taste. Roughly around age 33 is where things start to appear more stagnant: 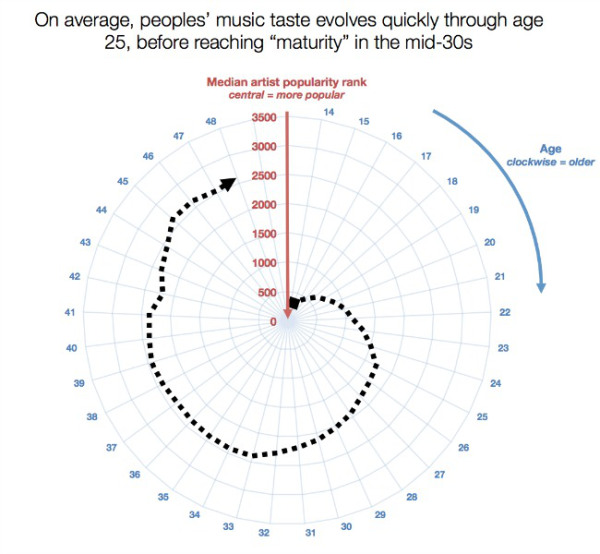 Other results from the study show that parents and men are more likely to "taste freeze" much faster. Hey, I think we just solved the mystery of Dad Rock!

You can check out the full study on Ajay Kalia's site.