It seems like forever ago since Zayn Malik left One Direction. The subsequent leaks, twitter feuds, and hairstyle changes undoubtedly make it seem like much longer.

Unfortunately for us fans, it might actually be a lifetime before we get to hear legitimate new music from camp Zayn. After last night's "No Type" leak, the culprit has been discovered, following a fresh round of denials from Naughty Boy.

just wait for the real one you won't be disappointed

The rapper who appears on the track (Mic Righteous) went down the leaky path, releasing the song without permission from Naughty Boy or Zayn, citing his own frustrations with the industry.

What's more interesting is Mic Righteous' revelation that Zayn may not be able to release music for another two years following his One Direction exit. 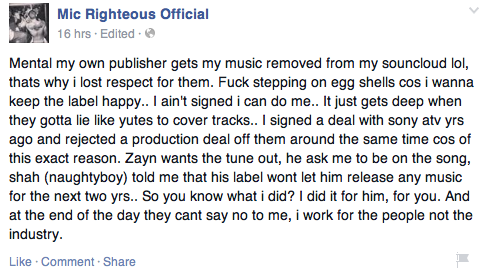 Obviously camp Zayn hasn't confirmed or denied these rumours but, if they're true, that basically rubbishes all the 2016 solo album speculating.

Zayn can't release new music for 2 years but have you heard his "No Type" remix with Mic Righteous?

Uh-Oh, One Direction Are About To Compete With Zayn For The First Time